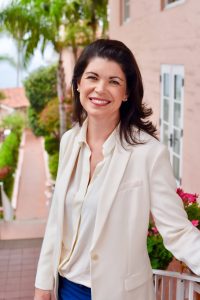 La Valencia Hotel welcomed one of the hospitality industry’s leading professionals, Summer Shoemaker, as its new General Manager in 2019. In her role, Shoemaker has raised the iconic hotel’s already impressive bar when it comes to impactful guest stays and one-of-a-kind food and beverage offerings. From honoring the hotel’s history and its place in the community, to continuing to enhance guest experiences on every level, the future of La Jolla’s Pink Lady continues to look bright with Shoemaker on board.

Shoemaker’s hospitality roots run deep, growing up and splitting her time between two hospitality-driven destinations – Northern California and Hawaii. She started her hospitality career at the age of 19, working the front desk and serving as the guests’ first impression of the hotel. From there, she became familiar with every facet of operating a hotel. For a decade, Shoemaker called Estancia La Jolla Hotel & Spa her home as the Director of Conference & Event Services. Following her time at Estancia, Shoemaker became the Director of Operations at L’Auberge Del Mar where she strategically managed the team the day-to-day business of the hotel. It was the allure of an opportunity to run an iconic building and iconic hotel which led her to make the move to La Valencia.

“I’m honored to be part of such an incredible team and historical property in La Jolla,” said Shoemaker. “For over 90 years, La Valencia has had a significant impact to many in the community, and we continue to honor and embrace that fact as we move into its future.”

When Shoemaker isn’t thinking of creative ways to enhance guest experiences or bringing superior leadership skills to her role at La Valencia, she enjoys San Diego’s beautiful weather while hiking, camping or walking on the beach. She also adores being out with her son and soaks up every minute of it.